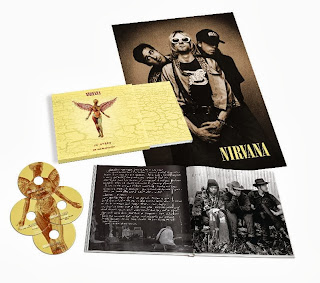 My friends and I had been anticipating the release of Nirvana’s new album “In Utero” since April, when we had seen them in concert at the Cow Palace in San Francisco, and they had played a slew of new songs—most of them, actually—from the forthcoming album, which they had finished recording not long before the show.

Once the name of the new album—yes, we had problems pronouncing it correctly at first—and the release date of September 14 had been announced, we began planning on how to get our hands on it at the earliest possible opportunity.

At the beginning of the month, I was riding in the car with my mom and listening to the local rock station when the DJ announced that he was going to play the first single from the new Nirvana album—as the opening notes of “Heart-Shaped Box” streamed out of the speakers, I implored my mother to drive as quickly as possible to our local record store, thinking that “In Utero” had been released early, and was already in stores.

Since we happened to be fairly close to the store, we made it there in just a few minutes, and I remember bounding out of the car just as the feedback ceased and the pick scrape ended the song, and bursting through the doors of the store.

I quickly looked around at the front shelves where new releases were displayed; not seeing “In Utero” I turned to the counter and excitedly asked the guy at the register if they had it—he shook his head, and told me it wasn’t coming out for another couple of weeks.

I told him that I had just heard it on the radio, and that it must be out already. He smirked and then explained that radio stations usually get new singles in advance of the commercial release, to help promote sales of the album when it is eventually released to the public.

Looking back on it now, in the age of iTunes and internet pirating, it all seems so quaint, but for those of us over the age of 30, we can remember a time when you couldn’t access a song simply at the touch of a button.

In fact, I remember going home that afternoon and sitting in front of my cassette/radio boom box and waiting for them to play the song again; eventually, they did, and I was ready with a blank tape to record it. This was also in a time before I could afford something like a piece of stereo equipment with a nice digital tuner and antenna, and therefore the recording was rather bad; the reception wasn’t all that great, and static filled the gaps when the signal got weak.

But, I had my first recorded taste of the new album, and played it over and over again.

A couple of my friends—whom I had gone to the Nirvana concert with earlier that year—were also excited, and when the big day finally came, we made our plan. We knew the record store wouldn’t be open before school started, so we decided to run down there on our lunch break—our school had an open campus policy, and we knew we could get back in time without getting in trouble.

We hurried to now-defunct Cymbaline Records in downtown Santa Cruz only to be told that the shipment was delayed, and it would be another week before they got it.

The following Tuesday we again made the trek downtown on our lunch break. This time, my impatience lead to my asking the friend with a Discman (I didn’t have one yet) to bring it along with us so I could listen to a song or two on the walk back to campus.

We got to the store, saw that an “In Utero” promotional poster was in the window, and we ran inside.

I quickly grabbed a copy off the rack, plunked down my money, and went outside to tear into the packaging (they had things called CD long boxes back then, kids) taking a cursory look at the CD insert and artwork, and threw the disc into the player.

While the album opens with “Serve The Servants,” I really wanted to hear “Rape Me”—Nirvana had opened with that tune at the concert I had seen them at—a benefit for Bosnian rape victims—and I had been waiting to hear it again ever since.

Walking back up the hill to campus, the opening chords and haunting intro played out before my ears were filled with the thunderous bass and drums and Cobain’s plaintive and caterwauling wailing. I was blown away.

Once the song was over, and after seeing my expression, my friend demanded his Discman back for a few minutes so that he too could listen. I complied, and by the time we were back at school, we had the soundtrack for the new chapter in our lives we had just embarked on.

Of course, it was also the end of an era. None of us could have predicted at the time that this was to be the last time we would be looking forward to hearing new Nirvana music (posthumous B-side and demo releases aside).

Maybe I’m just turning into a jaded old music writer, but it’s exceedingly rare these days for me to get genuinely excited about an upcoming new music release; however, I am really looking forward to what the 20th anniversary reissue of “In Utero” will hold.

The super-deluxe edition promises a re-mastered version of the album, a new re-mix by done by Dave Grohl, Krist Novoselic and Steve Albini, a host of unheard demos, and finally, the long-awaited DVD release of the full live concert filmed in December of 1993 on the “In Utero” tour for an MTV special.

It may have been two long decades since these memories took place, but while listening to “In Utero” today, all of the same emotions—anticipation, curiosity—are flooding back—although I have to admit to a bit of sadness as well. It’s another reminder that there will never be another new Nirvana record, the finality of an artistic vision cut all too short.

While we can never know what may have been, one thing is for sure—come this Tuesday, September 24th, I’ll again be running out on my lunch break to the nearest record store and picking up “In Utero,” eagerly awaiting to hear what sonic treats await.